In 2007 I hitchhiked for the first time from Poitiers, France to La Rochelle. The latter is a small city on the Atlantic coast and I had been living in the former as a student. I went on the small roads, zig-zagging through the countryside until finally landing at my destination and becoming good friends with one of my first couchsurfing hosts. France is as good a country as any other when it comes to beginning hitchhiking. 8 years on and I’ve added a whole lot more zig-zags to myriad peeling maps of the world. Now, for winter break in 2014, I was back in Europe, hitchhiking in France once more. So I’ve decided to write an article about hitchhiking in France, the first in a possible series of articles based on hitchhiking in the countries that I know.

Digital help for hitchhiking in the metropole

As you probably know, there exists a site for hitchhikers called hitchwiki.org. Most of my experience in hitchhiking has been in Latin America, and websites like hitchwiki were not helpful to me there and then. Although I’ve built up a conscious blockade against using websites for hitchhiking, something about the pressing nature of a limited winter break gave me the gusto to try it out. The France hitchwiki happens to be one of the more elaborate of them all, and it came in handy. So, I’ll recommend it for hitchhiking in France.

The basics of hitchhiking in France

Like in all other highly developed countries, France has constructed a system of high-speed tollways that skirt the peripheries of cities. These have entrance and exit ramps, tolls and rules against hitchhikers and other pedestrians. France is also teeming with a web of lesser roads on which you can walk and throw thumb.

Where to hitchhike on the autoroutes

These big, fast highways are called “autoroutes” in French. They will take time to get to, and you should want to hitch from a popular entrance. Since the autoroutes cost money, there is always a tollbooth (peage in French) at the entrances. You should be able to hitch from the entrance side of these tollbooths. A smart tactic is to try to get a ride at least to the first gas station along the road (aire in French). Do this by estimating how far away it is, and have a sign with the kilometers. In big cities, you can always combine a bit of research of the local transportation system with some eyeballing on Google Maps to find out how to reach the best spot. If you want to save yourself some time, have a gander at the hitchwiki for some quick advice on how to get out of the big French city in question.

Where to hitchhike on the lesser roads

As always, the smaller routes are free, slower, and much more intriguing. Europe is old, and Western Europe is rich. As such, you can see right away that France is peppered with cities and red lines marking the roads between them like an obsessive game of connect the dots. Hitchiking in France is made easy by such a network, but it can also become laborious if you have a destination in mind, since many rides will be short. If you’re in a hurry and need a long haul, stick to the autoroutes. If you choose these lesser roads, you’ll quickly learn without my telling you that the place to hitch is generally always a roundabout. Endless roundabouts.

How to hitchhike in France

It’s easy: use a sign. Latin America was another story for me, for a great many reasons. Not least of all these reasons was interest in an obvious foreigner. I found that a sign hurt more than helped me in many occasions. Hitchhiking in France is just the opposite. People will avoid picking you up if they’re unsure of where you’re going.

I find that French drivers are extremely interactive with you if you are in a spot where they have to slow down some. They smile, wave, shrug, gesture, beep, and sometimes they say hi. Hitchhiking from a more rigorous spot where cars move quickly sees this friendly kind of reaction disappear entirely. Regardless, hitching in France is made easy with a smile. Oh, and do raise your thumb in addition to the sign. And girls help. 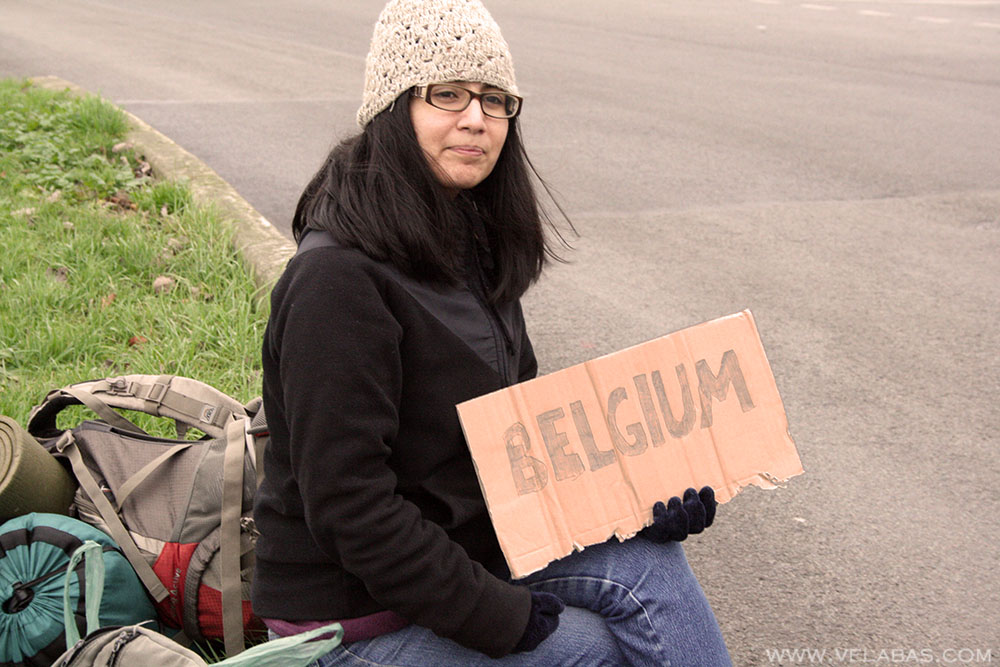 Hitchhiking from France to Belgium, we just needed a better pen…

What to eat on the road in France

Luckily for vagabonds, French food is accessible and marvelous. Of course, it all depends on the season, since you may not want to find yourself carrying around a Camembert in summer, but in general there’s always something easy, cheap and portable. Here are a few things I enjoy to have with me when hitchhiking around France: 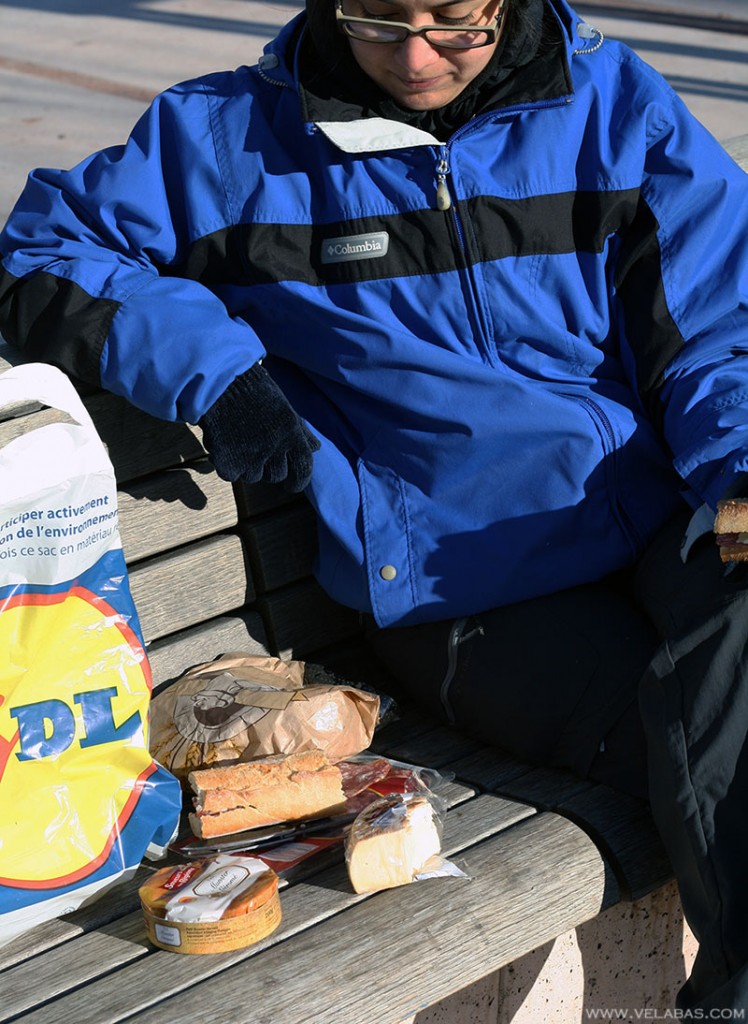 Bread, cheese and meat on a bench.

Where you sleep on a French hitchhiking journey

France can get cold in the winter, specifically in the northern climes. So when winter hits, having a sleeping bag graded for -10 to 0 degrees C should do. That’s around 20 degrees F, for those uninitiated to the metric system. So, where is it that you’ll be sleeping?

Lucky for us hitchhikers, French farmers don’t seem to have a lot of weapons that they’re willing to use against one-night-only squatters. Most of France is flat, and despite most of it being cultivated, there’s always somewhere to camp. Around the autoroutes you can expect plenty of camping possibilities. I’m talking about unfettered camping, not camp sites, although you can find those in good supply in the more touristic parts of France, especially the south.

Hostels exist in abundance in the bigger cities. There’s one kind of government-funded hostel in France called “Auberge de Jeunesse“. These are often the cheapest places to stay, ranging from 13-25 euros a night. It’s a nice option if you’re in need of a nice hot shower and bed. For the French youth below 26 years, the price for a night is halved.

Finally, hospitality websites like couchsurfing.org and bewelcome are very popular in this country. 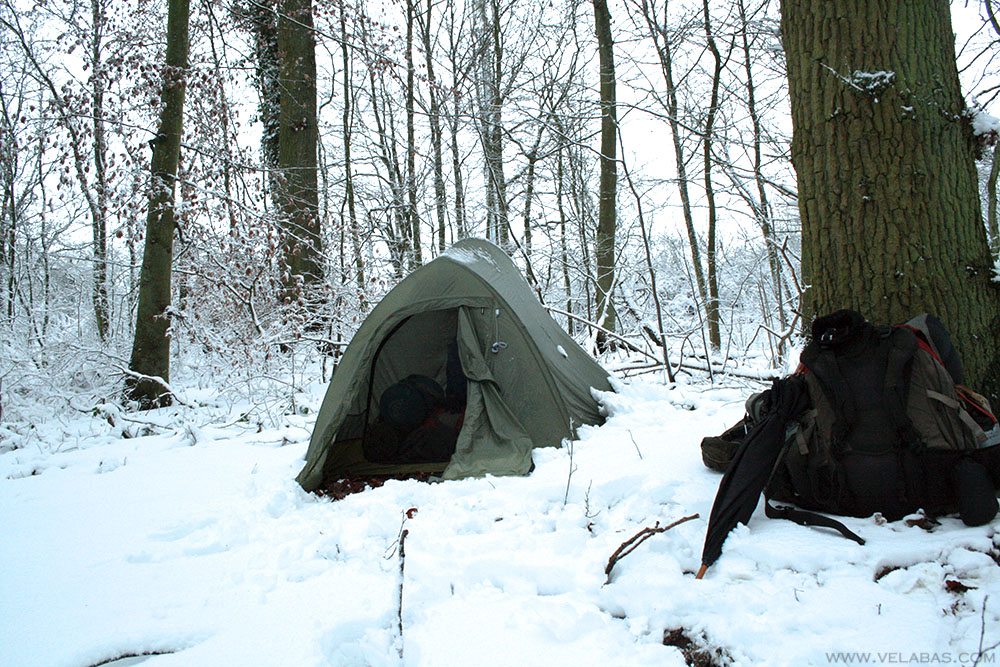 A bit of winter camping on the roads of France.

How to say a few things in French

You’re going to have to say something in French if you plan on asking around at those autoroute gas stations. Here are a few things in French to get you started:

Excuse the old slander; I say frog in loving tones. I enjoy French company, probably because they speak at my rhythm and topics tend to hover around things that I enjoy discussing. Every nation has tendencies that stick around in the offspring of its nationals even if those become internationalists later in life. I happen to enjoy the stereotypical banter.

So, hitchhiking around France will bring travelers to its beautiful cities where you can remake the world around a table with new French friends. I have not been everywhere in France but I can claim to have been to many places. Of them all, those I enjoy most include Normandy, Paris, Dordogne, Provence, Carcassonne and Strasbourg. When next I return to France I’d be happy to hitchhike to Dijon and learn about those fabled dukes.

One thing to see hitchhiking in France: the basilica at the Caracassonne Cite.